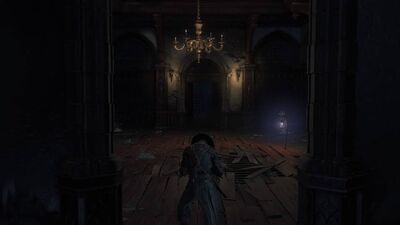 The "1st Floor Sickroom" is the room you start the game in. You can come back later on, but the doors will be locked and Iosefka will be talking with you, giving you some of her quest lines. You can also reach it from the second location, you will have to come from the "Forbidden Woods" for that.

The first way is the lamp. the lamp always brings you to where you fought the wolf at the beginning but the doors behind will always get closed, no matter how much times you open them.

The second way. using the *Forbidden Woods lamp. as you spawn there, go forward to the path to which you arrive at a little village. at the left side of the village, a little house rounded by cages with guard dogs. behind the house, to the left, a passage to a cave.. go down forward but watch your step. ( this cave will have 2/3 giants inside it, and will be full with a poison pool so bring some blood vials. ) keep going forward until you see another passage, go in and find the ladder, climb it to reach another ladder and climb this one as well. when you reach the top, open the gate to the right, of course you wont need it but its useful in cases. turn back and go to the stairs, go down and keep going forward until you reach a ladder, climb the ladder and go forward to a broken window. now.. new steps down below.

1. Turn right to a room which has an enemy in it, kill the enemy. on the same operating table you woke up in the beginning of the game will be an item called *Cainhurst Summons. 2. Turn left and go ALL the way down the hallway and reach a room with a chest, the chest contains -?- . 3. Turn left, and then right. go to the doors and open them, once you do, Iosefka will be there and then:

Talking with Iosefka when the doors are closed, she will tell you to tell people about her place. for each NPC you bring her, she will give you -?- . the NPCs turn into enemies.