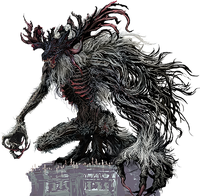 The following is a list of Monsters in the game Bloodborne. Those afflicted with the Scourge of the Beast sooner or later transform into unspeakable abominations, creatures without familiar shape or form. After roaming the streets night after night to rid the streets of beasts, even the denizens themselves eventually take on a crazed and demented look. Peer deep into their clouded eyes and you will find it impossible to tell the difference between hunter and beast any longer.

This article is a stub. You can help Bloodborne Wiki by expanding it.